Is Bitcoin a potential global currency?

Over the last decade, Bitcoin has emerged as a potent force in the emerging digital economy.

by Abhinav Swarup
in Economy, Cryptocurrency
Reading Time: 4 mins read
A A

Over the last decade, Bitcoin has emerged as a potent force in the emerging digital economy. As the Bitcoin price continues to grow astronomically, its price volatility has created a fervent debate between economists, policymakers and businessmen about its legitimacy as a global currency. Bitcoin claims that “it is the first decentralized peer-to-peer payment network that is powered by its users with no central authority or middlemen.” Traditional Fiat currencies are governed and controlled by the government. Bitcoin can upend that monopolization and that makes traditional bankers and governments nervous.

But at the heart of the debate is the fundamental question – can a volatile currency like bitcoin be an investable asset?

The common belief is that current assets typically have an underwritten value guaranteed by a sovereign state and that is what gives them legitimacy and value. However, this is not entirely true. Almost all modern currencies are Fiat currencies not backed by gold or silver. They have value because the government says so and they are worth exactly what people are willing to pay for it – just like cryptocurrencies. That is the reason why Fiat currencies get devalued with inflation and hyper-inflation or trade deficits. Governments try to control that value (exchange rate) using tools such as interest rate and other monetary policies and/or, capital controls.

This is where the Unholy or the Impossible Trinity comes into the picture. According to Ark Invest – a new investment firm focussed on disruptive technologies, “while distracting naysayers from assessing its role as a store of value, bitcoin’s volatility actually highlights the credibility of its monetary policy. The Impossible Trinity, a macroeconomic policy trilemma, explains why”.  As illustrated below, the trilemma postulates that, when formulating monetary goals, policymakers can satisfy two out of three objectives, not all three, as the third will contradict one of the first two. 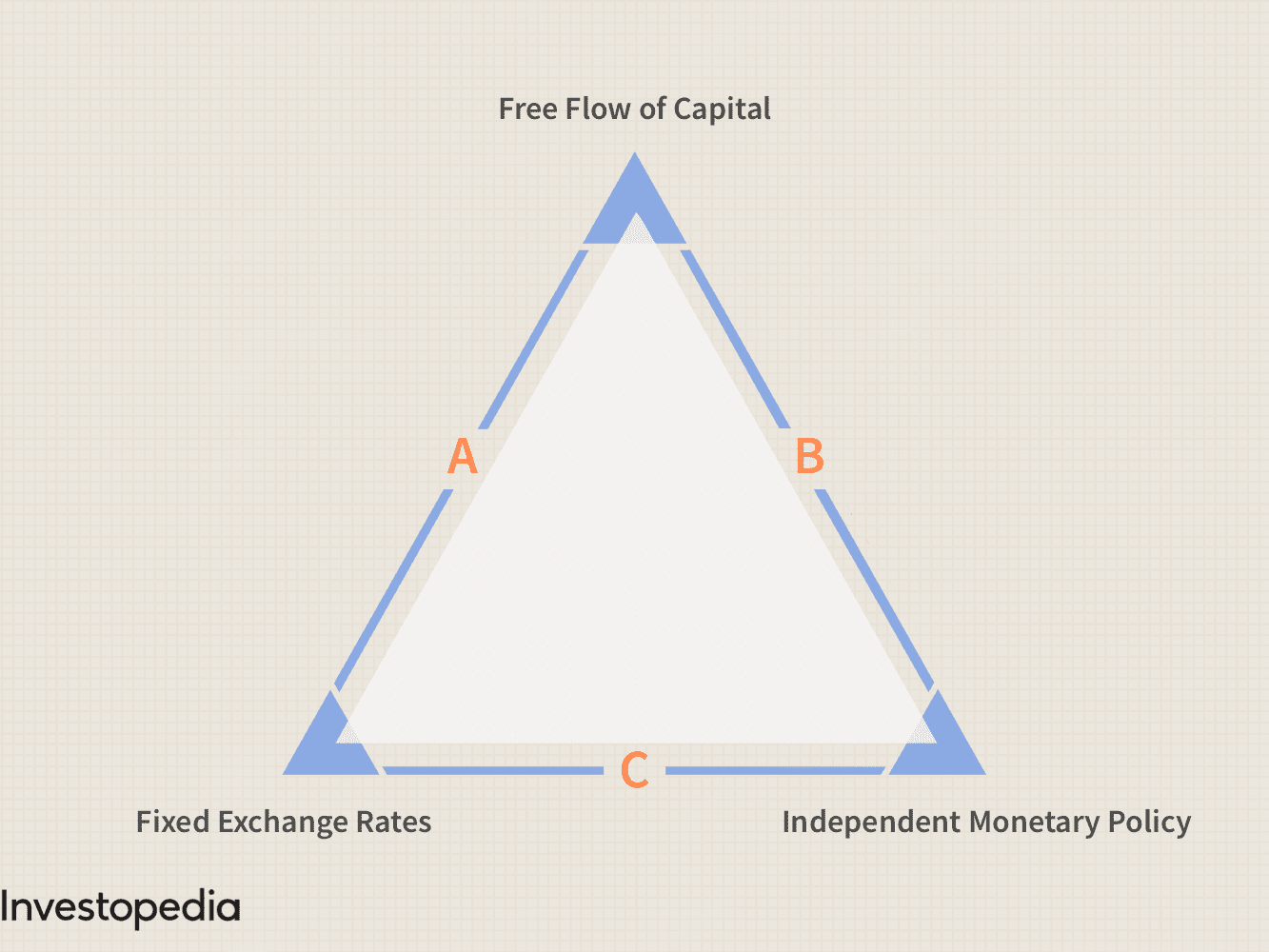 Basically, any government or regulator can only achieve one side of the triangle. And hence the term Impossible Trinity. The three mutually exclusive options for any regulator are as follows:

If we understand which side of the triangle Bitcoin has chosen (Side C), we can understand why volatility is a natural consequence of Bitcoin’s monetary policy. In contrast to national policies, Bitcoin does not prioritize exchange rate stability. Instead, based on a quantity theory of money, Bitcoin limits the growth of money supply and allows the free flow of capital, letting go of a stable exchange rate. As a result, bitcoin’s price is a function of demand relative to its supply. Its volatility is a natural outcome of its choice of Side C of the trilemma.

Will Bitcoin become more stable in the future?

According to data published by Ark Invest, bitcoin’s volatility is diminishing over time as its network value has increased. As more people adopt Bitcoin its network value (or total capitalization) increases. So as adoption increases, the marginal demand for bitcoin should become a smaller percentage of its total network value, diminishing the magnitude of price swings (see diagram below) 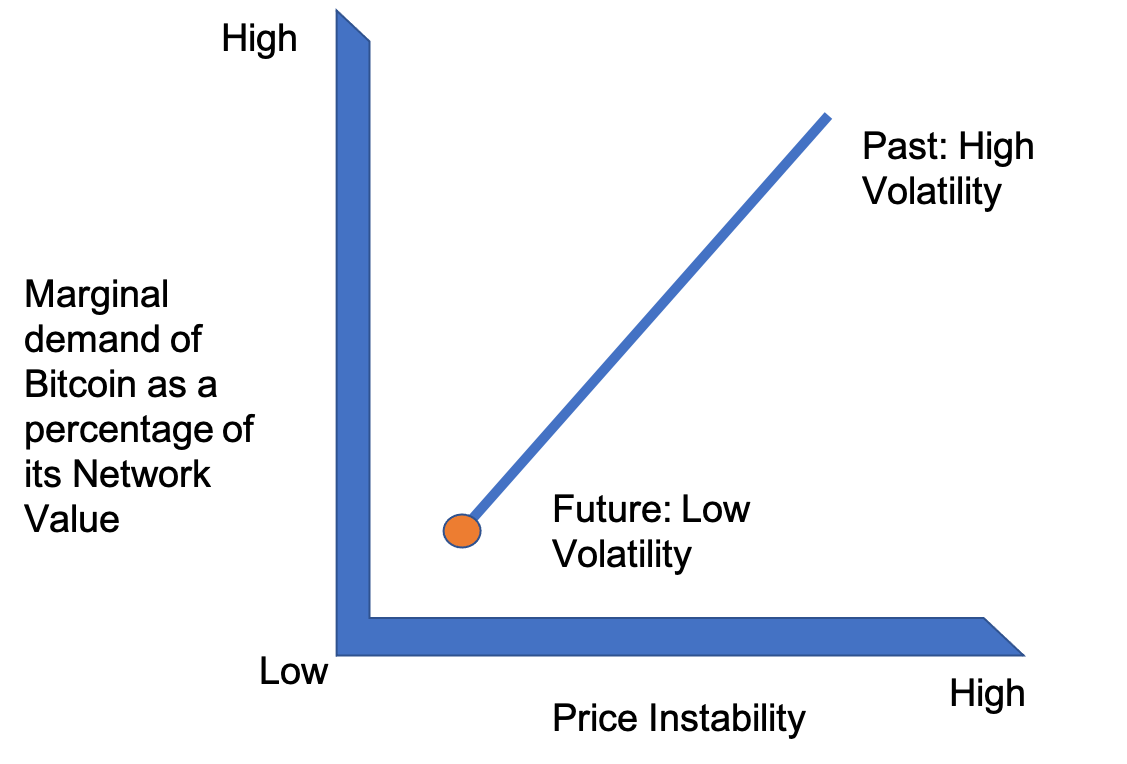 If Bitcoin wants to create price stability today, it can easily do so by increasing the supply of bitcoin and thereby reducing the marginal demand – exactly the same way central banks operate. However, this is not desirable as, based on the impossible trinity, it will lead to restricted capital flows. So Bitcoin is opting to operate in Side C of the triangle and create a true alternative to national currencies. An alternative that can transform the global economy.

Also, the current volatility in price is not necessarily a criterion to claim that bitcoin is a poor store of value. Historically, that volatility has been accompanied by significant upward moves in its price. Over time bitcoin’s purchasing power has increased significantly (the price of bitcoin has compounded at an annual rate of roughly 200% and, despite significant intra-year moves).

There are three key conclusions from the analysis I have done: (a) Bitcoin is a global phenomenon that is disrupting traditional banking paradigms and creating a currency that encourages free capital flow; (b) Bitcoin’s price instability is a deliberate choice and over time the volatility will significantly reduce, and (c) on a long-term investment horizon, Bitcoin has been delivering an extremely high rate of return (200% annual compounded return on a 10-year horizon). Therefore, as per my analysis, Bitcoin is not only a great long-term asset to own but also has the potential to become a true alternative to global currencies. National Banks, beware.

5 Books For Self-Help And Motivation

Books To Read This Year- The Most Anticipated Books Of 2021

Books To Read This Year- The Most Anticipated Books Of 2021